The town was founded around 1550 by Kamal Khan, a Mirani Balooch and a descendant of Ghazi Khan who laid foundation of Dera Ghazi Khan. Around 1610, the town was taken from the Mirani Rulers by the Jaskani Balochs, who held it until 1787. Abdun Nabi Sarai was appointed Governor by Timur Shah Durrani, but three years later it was included in the Governorship of Muhammad Khan Sadozai, who transferred his seat of Government to Mankera.
In 1794, Humayun Shah, the rival claimant to the throne of Kabul, was captured near Leiah and brought into the town, where his eyes were put out by order of Zaman Shah. Under the Sikh Government, the town once more became the center of administration for the neighboring tract, and after the British occupation in 1849, was for a time the headquarters of a Civil Administrative Division. This administrative status of Layyah was short-lived and the British reduced it to the level of Tehsil headquarters, making it a part of Dera Ismail Khan. In 1901, Layyah was transferred to the new District of Mianwali. Later on, it was made part of the Muzaffargarh District. In 1982, Layyah Tehsil was upgraded to District headquarters comprising three Tehsils: Layyah, Karor Lal Eisan and Chaubara. The municipality was created in 1875. The population, according to the 1998 census was 2 Million.  Per capita income during the ten years ending 1902-3 averaged Rs. 9,900, and expenditure Rs. 10,100. In 1903-4, the income was Rs. 10,600, chiefly derived from octroi, and the expenditure was Rs. 10,600. 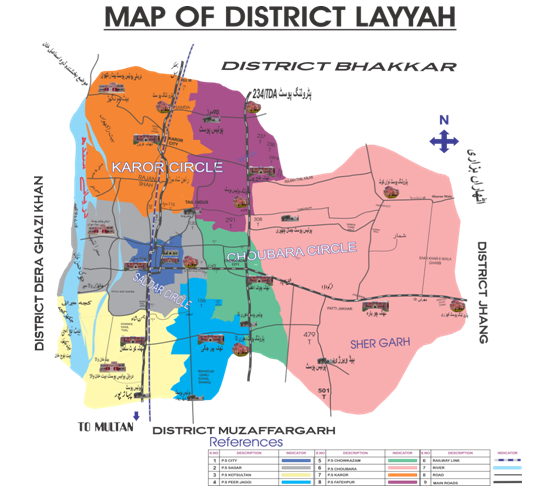 In Layyah, Arain, Jutt, Syed, Sumra, Jakhar, Sehar, Aulakh, Thind, Merani Balouch, Lohanch,Magsi,Buppi are main Tribes. The majority of the people in the District speak Saraiki (70%) and Punjabi (20%), Urdu is also widely spoken all over the district.
Geographical Location
Layyah District (formerly spelled Leiah) is bounded to the north by Bhakkar District and to the east by Jhang District. The Indus River flows to its western side across which lies District Dera Ghazi Khan and to the south Muzaffargarh District.
Area
The Layyah District has an area of 6291 square kilometres and comprises three Tehsil namely Layyah, Karor Lal Eason, and Choubara.
Climate and Soil
The Layyah District has an extremely hot climate. Maximum temperature in the summer goes up to 53 Degree Celsius. The temperature in winter is low due to the area's nearness to Koh-Suleman range of mountains. The Chaubara Tehsil is almost barren and consists of forest and sand dunes. It is a ‘Rakh’ under the control of the Forest Department. The Tehsils of Layyah and Karor Lal Esan are developed agriculturally compared to other Tehsils of the Distract but still have are large tracks of sand dunes and uncultivated land. The Indus River passes from north to south on the western side of the district and touches Dera Ghazi Khan. The other main city of District is Chowk Azam has a population of 200,000